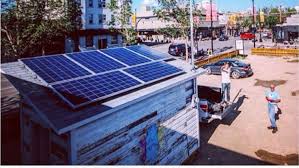 A donation of solar power panels is cutting a Riversdale ice cream shack’s electricity bill in half.

Emma Ganton, the manager of Scoop Ice Cream Shop on 20th Street, said the idea came from a business owner across the street, Brian Johnston of Roots Rock Renewables. “He just saw our Scoop shop being built, and he decided that he wanted to put up solar panels for us because the roof is like the perfect slant,” she said.

The ice cream stand is a project by the Street Force Youth Centre, and involves a group of young people who wanted to create a summer job Instead of struggling to find one.

Ganton said Johnston believes in what they are doing at the shop, and paid for the panels and the installation. Without the donation, she said it’s unlikely they would have been able to do it themselves.

She would think about installing solar power if she becomes involved in a bigger business.

“There’s an app that he’s going to give me that shows me how many trees we’re saving a day and all these exciting little facts,” said Ganton.

“I’m pumped about it. It’s really sunny this summer so I think this is a great summer to do this.”