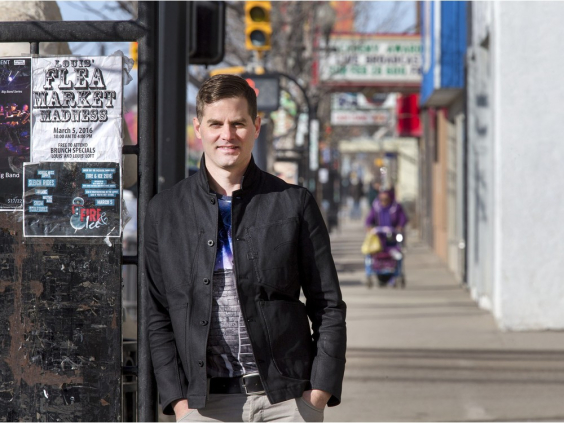 The term “Alphabet City” isn’t one the University of Saskatchewan’s community engagement officer has heard in a long time.

In fact, he hasn’t heard it since he used to live on Avenue J.We apologize, but this video has failed to load.Try refreshing your browser, or
tap here to see other videos from our team.

It’s been used to describe the area of Saskatoon that spans Avenues A to Y — there’s no official Avenue Z  — on Saskatoon’s west side.The mostly residential lettered avenues are filled with narrow lots and cars parked on the street — driveways were the developers’ afterthought when the smaller homes were built decades ago.

“Alphabet City,” along with other phrases used to describe the area, is not rooted in praise.

For Andrew Dunlop, who is also a special historian and teaches a course on Saskatoon’s cultural heritage at the university, the Riversdale/Pleasant Hill area has always been a place of change. He says the stigma has always been there, and has been reinforced since the beginning of the city’s history.

“It’s almost a cultural thing in Saskatoon, like in a lot of cities, to have a sort of ‘the good part and the bad part’ in people’s minds,” he said.

“The very fact that … Saskatoon never named the streets, as it did in other places, you know, where there weren’t numbered streets, they had names of prominent individuals and business leaders, government leaders and so on. The fact that it always remained an unnamed anonymous place, and just an A, B, C, D, which I believe historically is connected to New York City.”

Indeed, New York’s own “alphabet city” is in Manhattan’s East Village. It, too, was associated with a similar negative image: suspicious characters, drug dealing, rundown buildings, as the New York Times noted in 2000.

But in the early years of this new century, a shift in New York’s so-called Alphabet City emerged: rising affluence.

In Saskatoon, the shift has come in the form of increased development activity — renovations and new construction, including a complex at the foot of Avenue B south, overlooking River Landing.

The area’s transformation — or gentrification, depending on who you ask — means familiar spaces, such as the Barry Hotel, have disappeared.

It has also meant that trendier businesses have opened in converted spaces, retaining their familiar exteriors.

Curtis Olson, owner of Shift Development Inc., has taken on development projects in the Riversdale area, including the Two Twenty on 20th Street West, and the Shift Home.

Olson’s own home on Avenue D is the end product of an infill development project. The HayLoft was converted from an old grocery store. The building also doubles as an event hall that plays host to live music shows.

At the time the idea was conceived, Olson was living on the west coast, and this signified a return to the Prairies for him. He’s now actively involved in the Riversdale community’s shift, and is a member of the Riversdale Business Improvement District. He says a lot has changed in recent years.

For starters, the amount of foot traffic has changed “dramatically” and there’s more diversity among the people who frequent the businesses, he said.

“And right now we’re seeing a pretty hugely diverse demographic of people you see frequenting the shops in the neighbourhood.”

About five years ago, when the Two Twenty was opened through his company, the area was home to a lot of older businesses. In the last four and a half years, newer businesses have filled in vacancies and buildings that once housed one large business have been renovated and divided up to house multiple, smaller businesses.

“Every time a business opens up its doors, it attracts their (the business owners’) circle of friends, their community to the streets,” Olson says.

He thinks the change in perceptions about the area has been driven single-handedly by the growth in small businesses.

“I think there’s a huge amount of optimism right now, and interest in what’s coming next.”

However, even with all the physical change, some perceptions may still be ingrained in the minds of residents.

Historically, Saskatoon’s downtown and Nutana were the “establishment” areas where white, middle-class people lived, and west of Idylwyld Drive is where the newcomers — or new Canadians — and people of different socio-economic backgrounds lived, Dunlop says.

The physical divide between the east and west sides of the city wasn’t created by the river, but by the old rail yards, which separated neighbourhoods with the more affordable rental housing from the east side’s bigger houses and bigger yards.

Now, instead of the rail yards, it’s Idylwyld Drive and the downtown development that form the physical barrier.

“And I think those things are hard to break,” Dunlop says.

He has heard people express concerns about not always being heard — a lot of people do the talking for them, he says.

“They want to be heard and not studied, and I think sometimes we study from (the) outside and come up with a lot of answers for putting our own voices on. I think there’s still a large number of people living there that may feel that a lot of things are said about those neighbourhoods without their voice being in it.”

In this series, the Saskatoon StarPhoenix will bring stories from each of the lettered avenues in the city’s west end, told by the people who live and work on those streets.