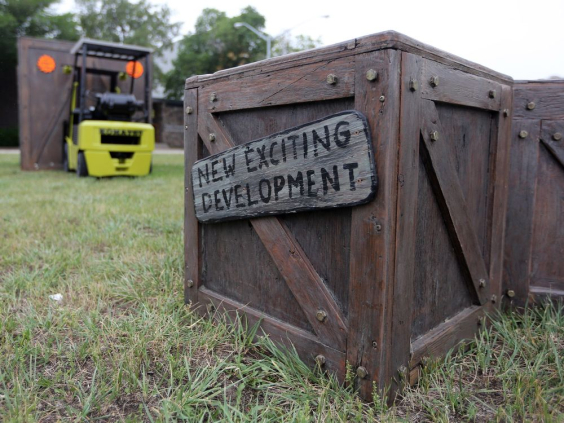 A forklift amid an assortment of crates at the bottom of the Broadway Bridge is the basis of one of the new pieces of art being installed as part of the City of Saskatoon’s 2016 Placemaker Program. The partnership with the Downtown, Broadway, Sutherland and Riversdale Business Improvement Districts (BIDs) aims to engage audiences with temporary works in civic spaces, Betty Ann Adam writes.

Outdoor artwork in Saskatoon about the potential of new development

An ordinary warehouse machine and anonymous crates that could contain anything and which are labelled “Coming Soon” create a moment of expectation akin to the anticipation that meets signs of progress and development, says artist Jason Gress of Nanaimo, B.C. “There’s a kind of utopia that happens when you see those signs go up,” announcing a new highrise or shopping mall, he said. “There’s this utopia until the shovels go in the ground. It’s all about the anticipation that our lives are going to be so much better if we live there or shop there. Nothing can go wrong in that space. There’s no cost overruns. There’s no noise from construction. There’s no disruption to traffic or competition for buying and all that kind of stuff. I was interested in that space where everything was still (potential), that newness and anticipation of development without all the problems and hassles of development.”

Signs of the times

The installation will feature a changing assortment of signs over its two years on the boulevard between 19th Street and Fourth Avenue. They will relate to historical development in Saskatoon, such as bridges, significant architectural structures or civic changes like Nutana joining Saskatoon. There’ll also be speculative signs, such as, “Celebrate the 100th anniversary of the Remai Modern fall 2117,” and some that relate to current construction.

Saskatoon’s weather will play a role when Gress returns to the city in November to encase his piece in ice. Before he erects forms around the elements to hold the water as it freezes, he’ll install some new signs that are likely to remain obscured and mysterious until the thaw. He’ll answer questions about the installation at a Meet the Artist event in November.