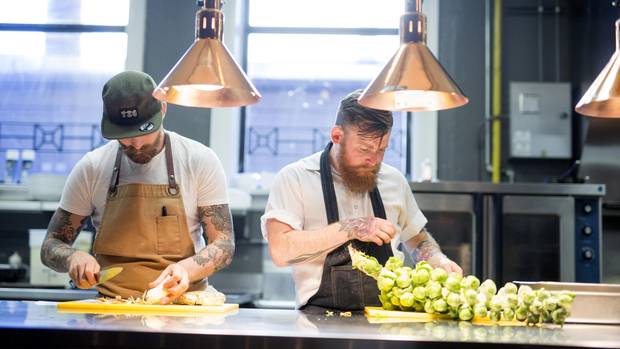 Chefs, artists and entrepreneurs who fled their stodgy hometown for the bright lights of a big city are now returning to create a vibrant scene

DAVID STOBBE FOR THE GLOBE AND MAIL

Let me tell you, I just returned from a weekend for the ages.

It started out right with this Prohibition-era themed feast by some of the best chefs in Canada; everyone from Todd Perrin of St. John’s Mallard Cottage to Nick Nutting from Wolf in the Fog in Tofino, B.C. – a whole coast-to-coast thing. All the guests looked gorgeous, dressed to the nines in 1920s flapper style. I even wore a fringy dress and a scarf on my head. So much fun. There was live music, dancing, barrel-aged cocktails, incredible food, black jack tables, the works.

The next day I dragged myself out of bed too early to go walking around the waterfront, River Landing, it’s called – all new promenades, splash pads and even al fresco gym equipment; a multimillion dollar project with an architectural marvel of an art gallery taking shape on the horizon. The thing is, once I got going I couldn’t stop exploring this city. I hoofed around the neighbourhood of Riversdale where I sipped a chai latte from a tin mug in a hammock chair at a beach-themed café, and then ate the most delicious canelés pastries at a bakery that mills its own flours and bakes everything in a wood-burning oven. I swear I could have been in Bordeaux, France. And get this: I had afternoon snacks at a drive-through perogy joint – drive-thru perogies! Then for dinner I ate a truffle risotto made from seven-year cave-aged rice that sort of changed my entire worldview, and capped the night off with a Janet Jackson concert.

I have to tell you, Saskatoon is totally happening.

Friends, I’m not a fan of stories in which writers from away go in and point out what locals have long known – that the city they live in is changing for the better, a cheerful trend affecting spots across Canada and the United States, be it Winnipeg or Charleston, often based on an upsurge in natural resources, a lower cost of living or a hometown cheerleader who has rallied the troops. Or in the case of Saskatoon, all of the above.

“As soon as I could get out of there, I got out,” explains John Jackson, co-chef/owner at Calgary’s Charcut restaurant and native Saskatchewanian, whom I ran into at the 1920s-themed Prairie Feast, where he and co-chef/owner Connie DeSousa prepared party-sized rabbit donairs with a dill aioli infused with local pickle vodka. Jackson says Saskatchewan was boring for kids like him. “The music scene was pretty good but, like every other kid I knew, you’d go one step over to Calgary or two steps over to Vancouver. Back then, everybody left.” That trend is reversing.

Potash, oil and natural gas resources mean the economy has grown by nearly 70 per cent since 2000 and the median age is the country’s youngest at 34.5 years. Real estate is on the uptick along with the population, which has almost doubled in the past decade.

“The food scene is what the really exciting thing is,” Jackson says. “[Chef Dale MacKay] saw it as an opportunity to go back home and do something big but with life balance. Being able to start a new business with your hometown supporting you is something special, and he saw the value in that.”

Dale MacKay is the co-owner of Ayden Kitchen & Bar, which won enRoute Magazine’s People’s Choice Award last year and also ranked eighth on the magazine’s list for the Top 10 Best New Restaurants. MacKay, who also won Top Chef Canada in 2011, persuaded a handful of his culinary crew (Nathan Guggenheimer, co-owner and chef, general manager Christopher Cho and head chef Jesse Zuber) to pack up their lives and move from Vancouver to Saskatchewan to open Ayden. To put this in perspective, I have trouble getting people to meet me for coffee.

MacKay and team are working on their latest restaurant, called the Little Grouse on the Prairie, which will open in the new year. He’s also on the board of Tourism Saskatoon, working to promote the city and its culinary scene, as he did with Prairie Feast, a sold-out, non-profit event that raised money to help improve community access to good food. MacKay has done something remarkable by bringing attention to an area that was already doing great things, but just needed a few more great things.

To that end, let’s talk about Riversdale.

The Riversdale Business Improvement District was established in 1990 to address high vacancies and to return the district to what it once was: a centrally located commercial, retail and business corridor, which had since fallen on hard times. A decade ago property vacancies were as high as 42 per cent. Today they’re sitting between 10 to 12 per cent. Yet surprisingly, this isn’t a tale of gentrification or displacement, as the majority of infill development has occurred on vacant land, abandoned sites and condemned buildings. So the dozens of shiny new businesses I visited, many of which are less than a year old, are co-existing with long-time residents.

A couple of years ago there were 167 businesses here, and today there are almost 550. The area is buzzing. At Little Bird Patisserie & Café, the prettiest little shop around, they’ve got a lemon tart that’s all kinds of sweet and sassy, and at Thrive Juice Co., they spin local haskap berries into healthy smoothies. Capanna Pizzeria is known for its blistered thin crust pies such as the Piggy, with boar bacon, prosciutto, chorizo and arugula, and not far away is the Riversdale Delicatessen and Market, its sister restaurant, owned by the same chefs, and an award-winner for the city’s best sandwiches. You may choose to drop in for a maple bourbon smash at the Grazing Goat, a cocktail bar in a 1905 heritage building, or the 9 Mile Legacy Brewing, a so-called “nanobrewery,” for a tasty local sugar beet ale straight from the tap.

This recent influx of restaurants and bars clustered in a small area allowed for the first-ever YXEatsfood festival. What’s more, Sept. 26 saw the second Nuit Blanche take place on a street where, not so long ago, few dared to venture after dark.

I saw Janet Jackson perform at the Sasktel Centre along with 14,000 other fans, who also may have shown up when Fleetwood Mac, Ed Sheeran, Shania Twain, Maroon 5 and, unfortunately, Nickelback came to town over the past year. But the biggest arts story out of little Saskatoon is the new Remai Modern Art Gallery, currently under construction and set to open in 2017. The architecture is stunning – it won a 2011 design award from Canadian Architect magazine before construction had even begun – and can be seen taking shape from the reimagined riverfront (River Landing), 14.5 hectares of parks and pathways, residential development, and yes, a farmers’ market.

“Remai Modern will be Canada’s first dedicated modern art museum,” Gregory Burke, executive director and CEO of the gallery, tells me. Its collection will include 405 Picasso linocuts (the most comprehensive collection of Picasso linocuts in the world), a gift from the Frank and Ellen Remai Foundation valued at well more than $20-million. Plus 23 Picasso sculptures – a gift from the Frederick Mulder Foundation – among countless other pieces and installations.

But getting back to the start of my weekend at the Prairie Feast, where chef MacKay was greeting his 200 guests in a 1920s-style tailcoat with two-toned wingtips, I asked him why he’d moved back to Saskatoon in the first place (this was before I’d had the chance to explore the city myself).

“It had been so long since I’d been able to spend any real time with my family,” he said, “and like all other chefs, I had worked my ass off. I’m an entrepreneur at heart and you’ve got to be smart. The way I see it I’d rather be successful in a small centre than have the huge overhead in a big centre.”

In Saskatoon, he can do what he loves and make a living. “It comes down to quality of life.”

The writer was a guest of Tourism Saskatoon. It did not review or approve the story.