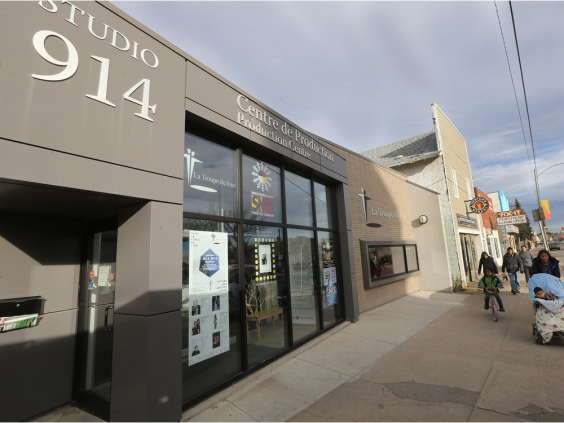 Legendary actor Gordon Tootoosis recognized the need for artistic opportunities for indigenous youth in Saskatoon, and he discussed it with co-star Tantoo Cardinal on the set of Big Bear.

“That was a big gap, and a void that was recognized immediately,” says Curtis Peeteetuce, artistic director of the Saskatoon Native Theatre Company.

The roots of the Gordon Tootoosis Nīkānīwin Theatre grew from there.

Its location on 20th Street West, adjacent to Avenue J, was chosen because the area’s demographics suit the theatre’s mandate and the audience it strives to serve in the community, Peeteetuce says.

“The local community is perfect for what we do. There’s a high indigenous population, and there are great stories to be told from this community.”

Peeteetuce sees the theatre growing, and it’s able to bring in more staff and performers. He acknowledges that growth may prompt a move.

Riversdale’s transformation, especially between Avenues A and C, is leading people to look further west, he says, adding that one of the current location’s benefits is that people are asking about the GTNT and “checking out” what it’s all about.

The GTNT was incorporated in 1999. Prior to moving close to the Avenue J area, it was located near Avenue C.

“The theatre company, although situated on 20th Street, knew that our indigenous cultures were well connected, and so just by where we’re situated, it isn’t just we’re trying to reach out to the indigenous population on 20th Street,” general manager Osemis Isbister-Bear says.

Although it’s based on 20th Street, the broader goal of the GTNT is to reach out to a wider audience in the city and province, Isbister-Bear adds. The location helps it remain as accessible as possible.

Isbister-Bear was involved with the theatre company, formerly known as the Saskatoon Native Theatre Company, as part of the first Circle of Voices in 1999. The long-running program allows youth to work with theatre professionals to hone their skills.

Now, he’s a part of the management team.

The previous fall’s Circle of Voices was a sold-out, standing room-only event, which amazed Isbister-Bear. The audience came to hear the stories and the voices of youth.

“I think the company’s had a very big impact over the years in Saskatoon in telling our stories, but (also) in breaking down barriers for both indigenous and non-indigenous people in how we see ourselves in the greater context of the city of Saskatoon,” Isbister-Bear says.

That inclusiveness is something Gordon Tootoosis was all about, Peeteetuce says.

“At GTNT we could always base ourselves in Treaty Six culture, but we’re very inclusive of all the other languages and the cultures of Saskatchewan and across Canada as well. That’s a part of the legacy work for us as well, continuing Gordon’s pioneer work.”

For Peeteetuce, the lesson from Tootoosis that he’d like to impart on youth is his humility. Tootoosis acted in Hollywood, but when you sat down with him, he treated you like you were a good friend or a family member, he says.

Isbister-Bear met Tootoosis when he was in the Circle of Voices program, and had “sparkles” in his eyes when he did, he says with a laugh. Although Tootoosis was someone he saw on TV, it was like talking to an uncle, he adds.