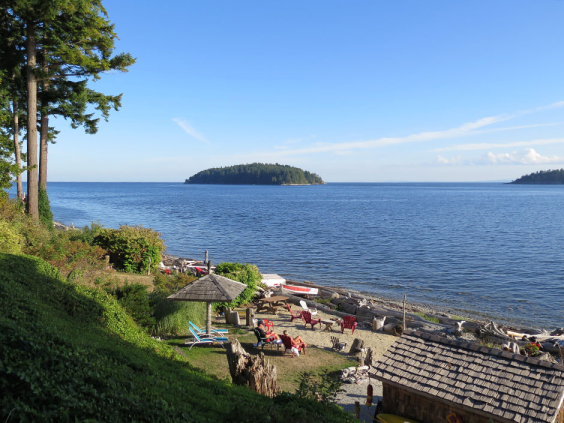 Author of the article: Postmedia News

I’ve been lucky enough to explore most corners of this vast country of ours. I’ve kicked around Quebec City, cycled around Calgary and even take a motorcycle sidecar tour of Halifax. I’ve also found more than a few places that I think deserve more attention than they get. Here’s a look at some of them.

With a tidy downtown that stretches only a couple blocks, this is a town you want to pick up and hug. There’s good local wine (try Luckett Vineyards on a nearby hillside with great views) and, of course, fresh seafood. I’ll probably get lots of arguments on this one, but I think Acadia University might be the most striking campus in Canada. www.wolfville.ca

You’ll find great local shopping in the Osborne Village area. Downtown is slowly coming along, spurred in part by the new home for the Winnipeg Jets. Assiniboine Park is one of the prettiest in North America, and the Canadian Museum For Human Rights features a stunning interior. Besides, you have to love a place where two of the best-known foods are called a “nip” (burgers at the famous Salisbury House) and a “goog,” a blueberry milkshake concoction at the famous Bridge Drive In. www.tourismwinnipeg.com

These islands east of PEI might be the most underrated place in the entire country. The light is magical, the beaches are endless and the people simply marvellous. You’ll find great food, nice galleries, wildly colourful homes and lovely B&Bs, including Havre-Sur-Mer and La Butte Ronde. The islands feel like PEI in parts, but with a few massive cliffs more closely resembling Cape Breton. www.tourismeilesdelamadeleine.com

Lots of folks of a certain age know of this area as the home of the old TV show The Beachcombers. You’ll find plenty of memorabilia at the fun Molly’s Reach restaurant in the pretty seaside town of Gibsons, which has a gorgeous harbour. You’ll also find magnificent kayaking and canoeing spots on places like the Sechelt Inlet. Try a “Slo-Cat” tour of pretty Pender Harbour for a relaxing day on the water. www.sunshinecoastcanada.com

The province’s southwest has some of the country’s freshest food and features amazing restaurants, including Twisted Lemon in Cayuga and Six Thirty Nine in Woodstock. There are exceptional craft breweries in London (Toboggan Brewing) and Sarnia (Refined Fool) and surprisingly rich wines at Burning Kiln. Grand Bend on Lake Huron might be the country’s best beach town. www.ontariossouthwest.com

The downtown is getting hipper by the day thanks to cool restaurants such as Bar Bricco and Tres Carnales (some of the finest Mexican food I’ve had on the planet) and funky bars such as the Mercer Tavern, located in a gorgeous old building near the Edmonton Oilers’ new arena. The Old Strathcona area has great little cafes and independent shops. exploreedmonton.com

It’s a spectacular setting, with multi-coloured buildings cascading up the hillsides and funky homes in The Battery neighborhood. The Rooms is a world-class museum that highlights fascinating history and temporary art exhibits. Raymonds has been voted one of Canada’s top restaurants, and the pubs and bars in and around George St. are always a blast. On top of that, Newfoundlanders might be the nicest folks in Canada. destinationstjohns.com

There’s something about frontier-type towns I really love; a certain spirit that’s infused in the locals and a “no worries” attitude that helps them through difficult times – and difficult weather. Such is the case with Whitehorse, a small city with a surprising diversity and engaging people. You’ll find excellent coffee shops such as Baked Café and a variety of ethnic restaurants just a few minutes from some of Canada’s most striking wilderness. The MacBride Museum of Yukon History tells great stories. www.city.whitehorse.yk.ca

There’s way more to this town than the little girl with pigtails. You can taste wonderful charcuterie at Terre Rouge. There also some fascinating shops, including a jewelry store called Overman where they’ve been known to fashion necklaces out of dead, black-and-blue beetles flown in from Thailand. www.discovercharlottetown.com

This prairie city has a lovely riverfront park system and an edgy shopping and restaurant district in Riversdale. Ayden Kitchen and Bar is one of my favourite restaurants in all of Canada with inventive food that’s not overly fussy and a cool interior. Likewise, the James Hotel is one of the country’s best places to lay your head with a sleek ambiance you might not expect. www.tourismsaskatoon.com

DEAL OF THE WEEK

Cabo San Lucas can get pretty pricey in winter, when Canadians are desperate for sun. But there are often great deals in the heat of summer. Palmilla Golf Club is offering 18 holes of play on the area’s first Jack Nicklaus-designed course for as low as US$95. You also can arrange a package with the magnificent One and Only Palmilla Resort, one of the top properties in Mexico.

DESTINATION OF THE WEEK

Capitola, California: I like to call this community the best California seaside town never mentioned in a Beach Boys song. You’ll find gorgeous, pastel-coloured rental homes on the edge of the beach, with a nice pier and good surfing. The town is a charmer with great galleries and fun, slightly spacey shops selling everything from surf gear to New Age crystals. There are several restaurants on the water or on the beach, including Margaritaville and Zelda’s. Just 90 minutes or so south of San Francisco, and just east of Santa Cruz, where you’ll find a great boardwalk with fun, old-time rides.